It’s been a brilliant start to the New Year… but things could only get better having spent New Years Eve dosed up on pain killers! I ended 2014 in style by skidding off a motorbike whilst renewing our visas in Penang, Malaysia. We had a wonderful day driving around the whole Island, stopping to swim in a waterfall and climb up to a temple in the hills. This was confidence building until I messed up on a sharp corner and took the skin off my palms. It’s been hard getting back on my bike in Bangkok but at least I can trust the brakes! From Penang we went on to Australia where we got to meet up with Jon’s cousin and family for a few days. This was a really blessed time of unwinding and Elliot and Sam loved playing with their ‘almost cousins’! We saw kangaroos, cooked on the barbie and soaked up all things Aussie!

The UNOH gathering in Melbourne was super valuable, dreaming together of God’s kingdom coming in our broken neighbourhoods. We loved hearing stories of how Jesus is at work in the lives of other communities and exploring together what makes our model of mission distinctive. Our family has come away encouraged that ‘presence’ is one of the main things we have to offer here and more determined to love in ways that won’t disempower our neighbours. After the retreat we had our time of orientation with two others just starting out. We spent time hearing about UNOH’s roots and doing the first module of our study programme. A highlight was visiting a Salvation Army community house where we met Wayne, an indigenous Australian in his early 50s, who told us his story of being separated from his mother as part of the ‘mission’ of assimilation. Hearing about the ‘stolen generation’ first hand left us all pretty outraged and wondering what other injustices we are clueless about.

While we were away the rats have moved in and are reluctant to give up their space! Otherwise it is so good to be back with fresh eyes to see our neighbourhood. Before Christmas we were terribly homesick for England but as we spent time elsewhere we found that we were homesick for Bangkok too. It’s funny how some things are becoming more normal as we adjust and other things I don’t think we will ever get used to! We have just had a week with the children at school but no language school till next week. This has felt like special time to spend reflecting on where we are up to and where we are going. We have wondered around different neighbourhoods in the slum at different times of day getting a feel for the wider context into which we seek to build bridges. Closer to home there is a new baby on our soi and we are hopeful for opportunities to connect with this family who are often a bit separate.

General update on the kids: we are so thankful that Elliot and Sam are relaxing into their new way of life and building strong friendships at home and school. We are proud of the way they welcome others into our home and are trying out new Thai words. They are both becoming super swimmers!

Here is a reflection from Jon:

A highlight last week was our regular walk to the Saturday night market in the slum to buy some food for tea. Tan came with us. Tan is a lively boy who has had a very difficult life so far. His Mum has struggled with drugs and violent relationships and Tan has lived many of his 10 years in survival mode. He is now mainly fostered by our team members and he is becoming a bit of a cheeky big brother to Elliot and Sam. Anyway, Tan brought along some of his pocket money, a scruffy little plastic bag with some tightly rolled notes and a coin or two. We got what we needed for tea, the kids bought noisy plastic toys, and on our way out of the market Tan spotted an old woman begging for money. He rifled around in his bag, pulled out some coins and trotted over to her. He bowed in respect to her and dropped the coins in her pot. Then he bought himself his favourite drink (some sort of highly coloured milk with jelly balls in).. and shared it with Sammy as we strolled back through the slum in the setting sun. This was a beautiful moment of a boy who has had so little being able to share and give, birthing compassion in his little heart, a heart that has at times been damaged and starved of love.

So as we go forward into this year, Tan and many others like him have inspired us to give out of our weakness rather than our superior wealth, knowledge or experience. Please pray that when we come to the end of ourselves (a regular occurrence!) we don’t hide away from others but begin to see this as a sacred space where we can share the things that really matter and be sustained by grace. The other day I was sitting with friends after a difficult day and felt God give me the ability to understand an important conversation about love. This built me up massively and re-assured me that language learning is not only dependant on my ability to study but is also gifted to us at times of need. All the same, please pray for the transition back to language school with two months of full-on study beginning on Monday. We will be doing tag-team morning and afternoon lessons which may put us under a bit more strain! 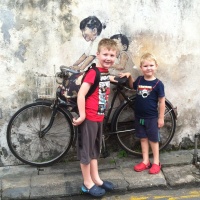 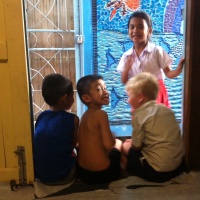